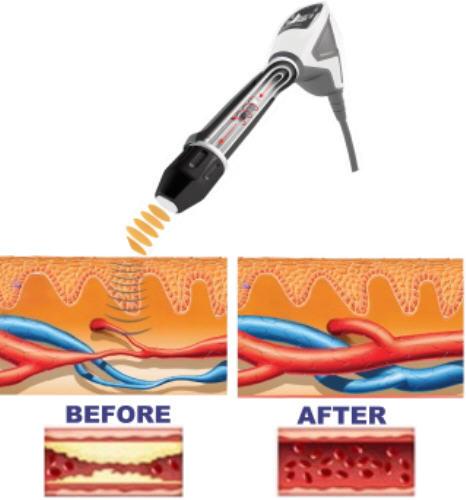 RejuvaWAVE® how does it work? There are many Shockwave Therapy protocols which bring drug-free, pain-free results.
Shockwave therapy has been used in Europe for over twenty years with about 80% patient satisfaction. Simply Men’s Health was one of the first clinics in the United States to introduce EPAT shockwave therapy for ED in 2015. As a result of extensive patient experience, the exclusive RejuvaWAVE® protocol was developed. The RejuvaWAVE® protocol maximizes the body’s regenerative capacity to restore sexual spontaneity.

RejuvaWAVE® was the FIRST trademarked ED shockwave protocol registered in the United States. Since, the introduction of RejuvaWAVE® shockwave treatment for erectile dysfunction and Peyronie’s Disease, there have been a flood of copycat therapies. Despite the deluge of copycats, and even perhaps big money marketing, RejuvaWAVE® remains the gold standard for ED shockwave therapy.

The data from independent studies includes findings that recipients of shockwave treatment enjoy benefits for “at least 3 months” after the procedure. A separate study published in the Journal of Sexual Medicine found that 91% patients who benefited from the therapy maintained improvement after 12 months. And separate clinical observations by physicians have shown improvements that can last two years or more. In contrast to published studies, at Florida Medical Group – Simply Men’s Health, we have patients who had severe ED that are still enjoying a spontaneous, active sex life six years following RejuvaWAVE® therapy.

The March 2018 issue of the Journal of Sexual Medicine featured a study evaluating recipients receiving 6 and 12 shockwave treatments during a 6-week period. The study then revisited patients six months later to measure the effect of an additional treatment session.

The study involved two groups: Group A was treated once a week and group B twice each week. Both groups enjoyed relief from their ED. Not surprisingly, the results indicated more improvement in group B, and found that revisiting treatment after 6 months “could further improve erectile function without side effects.”

The authors of the study concluded that the additional treatments created better results and that the treatment could be repeated up to as many as 18 sessions.

Research conducted at Kaohsiung Medical University-affiliated hospitals in Taiwan focused on patients who failed to respond to Phosphodiesterase type 5 inhibitors (PDE5is), which are a popular pharmaceutical treatment for ED. The objective of the study was to determine if shockwave therapy combined with PDE5is would be an effective treatment.

Subjects of the study were administered shockwave treatments once a week for 12 weeks, while continuing their recommended PDE5is use. Thirty-five out of the 52 patients involved were able to “achieve an erection hard enough for intercourse.” After 12 weeks, 94.3% of those success stories were still able to maintain an erection, and—perhaps most impressively—there was not one report of negative side effects.

Where to find the best LI-ESWT provider

While acoustic pressure shockwave therapy isn’t new, and it’s been used for years to help break up kidney stones, its application for ED in the United States is. And Simply Men’s Health was the first to introduce ED Shockwave therapy in Florida. Because of this, not all US doctors are trained in using LI-ESWT to treat ED. Although now clinics are popping up everywhere offering a shockwave therapy, RejuvaWAVE® remains the gold-stand against which the others try to measure up to.

In the United States, The RejuvaWAVE® therapy is an exclusive shockwave protocol with a greater than 80-85% success rate at treating ED. Click Here for a free consultation.